This episode was somewhat better than last week’s dire episode. There was a glimpse into Olivia’s past before she became the Olivia Pope and a little backstory into Liv and Abby. Still, it had little at stake, left things very unresolved, and still felt very flat. The only person carrying the season so far, is Mellie.

Liv is trying to re-enter into the life she left behind, hence shows up on her father’s doorstep, trying to get familiar with the cold world she has come back to. Papa Pope does a good job of sorting his daughter’s feelings for her. He is desperate to play normal families with her, or some modicum of the life they used to have. He misses that, and his little girl. Abby is still trying to find her footing in the White House, or at least trying to get the President to learn her name. Rosen has become a bad man… he is drunk on the power of his B6-13 Kool-Aid, still winning, if he can call it that. I guess Quinn and Huck make up the OPA, it just doesn’t feel the same without Abby and Harrison or even Steven from season one, yes I am still campaigning for that. Jake is still up to finding out what happened to Harrison, knowing full well Command is behind it…blah, blah, blah with Jake. I am over him. Mellie needs something to do, badly, a coping mechanism for her loss.

Liv is called by her friend, Catherine Winslow, to help find her daughter who didn’t return home after an argument. Rather Catherine calls Abby who calls Liv. Abby proceeds to tell Liv how she should Olivia Pope the situation but Liv quickly shuts her down. Its not her business to tell her how to handle the situation after all.

Cy and his boy toy have this cute run in at breakfast where the boy reveals he is more than just a toy, he is in business school, six credits shy of graduating. How Cy doesn’t know he is being played is a mystery to me, except this is some trick to lure the viewers into a false sense of security before taking us over a cliff in the end, but its such a dud. A lot is missing from this season. Still, Cy gets his thirst quenched.

Gun-control is still a thorn in Fitz’s side because those damn republicans won’t play ball… I don’t know, its only their main play and cash cow. Fitz goes on a little rant that further makes me feel like this is a forced storyline, maybe to get David to flash his brass balls and stay inside the bubble, a bubble we know is sure to blow up in his face. David gets around the road block by forcing one of the judges hands with his file from that B6-13 pile. Bad man. The judge gives in, but ends up offing himself with a gun because of said secrets. Bubble indeed.

Jake kidnaps Charlie in search of the truth of what happens to Harrison. Candy is Charlie’s undoing, wasn’t this the same with season 2/3 with the donuts? I am way beyond over Charlie’s storyline, there is no development here, much like Jake’s, but Jake has a little more to offer, a little more feathers to ruffle. Charlie is to what end? Maybe he is only around to make Quinn realise that like him, she too is without an anchor in the world, nothing makes it more obvious than when Quinn returns after being held captive with charlie for 24 hours, and OPA went on without her at which point she throws a hissy fit. Quinn is disposable, so why is she still here? Jake and Liv decide to go along to dinner with her Papa, where faux niceties are observed and the minute Liv leaves the table to take a call, Jake goes in for the kill, informing Papa Pope that he knows what he did to Harrison, immature play at best, and all but demands that he leave town to the island he banished Liv to. This scene has been on every other rom-com/crazy movie and I am frankly disappointed it was here. Come on ya’ll.

In a rather random and irrelevant storyline, Mellie becomes obsessed with the case of the Killer Cliff Bride and proceeds to try to solve the case because she needs a distraction from grieving for Jerry. Turns out that her help is not needed because the case has been solved by errr… the experts. I don’t know why this was not on the cutting room floor. What exactly did this serve, except for making Mellie feel pathetic and useless? I am not saying that to be mean, but what Mellie needs is not to be reminded that she is just an ornament on Fitz’s mantle, especially in her time of grief. 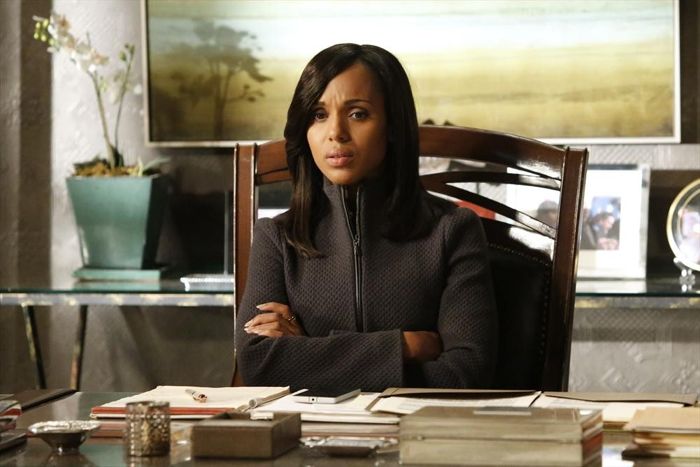 Back to Liv and Catherine Winslow, after further digging into the situation Huck discovers that Catherine made a sex tape with Caitlin’s boyfriend, which now places Catherine in the suspect pool. Caitlin turns up dead and all fingers point to Catherine as the killer. Huck finds another footage of Caitlin involved in a struggle with a strange man in an elevator… and that’s where we leave the case. Catherine is arrested for the murder of her daughter. If I were to hazard a guess I would day the father had something to do with it, or the boyfriend or something, not that I give a damn, its just a thought since we didn’t get to the bottom of this story.

And one more thing;

Rowan sums this season up so far when he says

So far I have been unimpressed with Season 4. I need the tense drama and riveting dialogue, I need the political statements encased in engaging story lines. I need hard hitting situations. I miss Sally “Lord’s disciple ” Langston, and Hollis and all the other bad people. We need more, like Liv would say. Jake needs to be gone he is becoming an incredibly needy bore, maybe his death is what leads Liv to blow the whole thing wide open. I need Mama Pope to come stirring shit up. WE NEED MORE PEOPLE.

Very well then, two. We have to talk about Abby, she is not in the bubble of the White House, she never will be. She is not Olivia Pope, she is much too afraid of the people she works with and for, she just doesn’t know what ground to stand on. I don’t like that Abby is all nice clothes, pretty hair and no gumption.