“I am not a hen in your house and my house is not yours…I am not a prize at the state fair. You can’t win me…I did not do this you. I did this for me. So I could work on the campaign…I am a person. I have…a desire to wake up and face myself in the mirror everyday. This is not about you. My whole life is not about you…”

Liv and Fitz have done the dirty in a hotel room I guess and after the deed is when she decides to assert herself as a person not Fitz’s puppet. Its almost as if she is trying to remind herself, especially, of just who and what she was before Fitz came into her life. The mere fact that he would think everything about her revolves around him is too ludicrous for her to take in. Fitz is none too pleased about this new thing with Jake because he knows where both are concerned its a grey area and there are feelings in and around them, Liv did not confirm or deny this anyway so he is right to be concerned. At the same time she is not his play thing, nor is she beholden to him, something he realises after Liv’s little rant.

This little post coital drama is crucial because it is the first time Liv has asserted herself to Fitz and although it’ll eventually hold no water, per usual, its good to see her set him straight. Man I wish she would rip into him. Liv has this way of giving herself a talking to indirectly whilst reading others. She has, for a long time now, put herself on the back burner because of other influences on her life, Fitz, of course, Daddy and his B613 antics, Jake, Quinn and her idiocy…she is reaching breaking point and I’m sensing she is just a little tired of the cycle. As are we.

Fitz is unfit to be President much less her lover. His selfishness and childishness knows no bounds at this rate. His habit of throwing a tantrum every time Liv dares to have a life outside of him is off putting to say the least, never mind that he has one, albeit for show, without her with his own wife and family in the White House. Men. 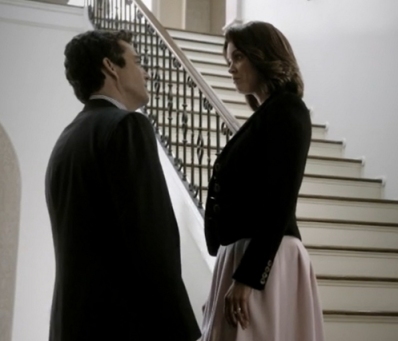 The new scandal to rock the presidential campaign is from back in the days of the Governor’s mansion; the press have gotten wind of a story involving drug abuse but not clear on who the abuser was. Andrew Nichols admits to being the abuser, giving a bogus story to go along with it. Enter the gladiators to track down the root of this story and kill it or come up with a strategy for handling it. In a series of flashbacks we get to the root of the story, Mellie was pill popping in the aftermath of being raped by Fitz’s father, Gerry, they were at loggerheads with each other and their marriage had grown cold. One night she took one pill too many, but for Andrew Nichols who saved her life. We also learn about the true nature of Nichols’ feelings for Mellie but despite her crumbling marriage, she held her own and remained the faithful politician’s wife. She even spilled the truth about her son’s parentage to Nichols in a bid to make him see just why she would want to end it all.

Mellie has emerged as a force to be reckon with on this show, the more we learn about her past the more its easy to understand the person she is today. Her past holds dark and sinister secrets that could tear the very foundation of the house she is so keen to protect. Fitz has no idea but a better man would have an inkling into what has been eating his wife for so long, instead he is pre-occupied with ways to get between his mistress’s thighs and sucking her face, concerned with who she is kissing when she is away from him. For now, Mellie has a friend in Andrew Nichols and I for one hope he stays that way and does not turn to a foe. But in that moment when they are in the room with the portrait of the first ladies, I am rooting for there to be so much more between them, if only to suck it to Liv and Ftiz… 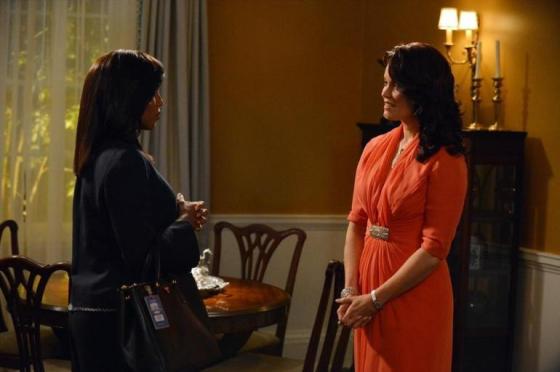 Speaking of, OPA soon find out that Mellie is the one who had the prescription for the Oxy and Liv puts two and two together…of course she would think Mellie and Andrew are schtuping, heck she would even root for it to be true because then it puts her in the same bracket as Mellie. But Mellie sets her straight, “we are not the same” she informs Liv that whilst she may be married to a spineless philanderer and she would be well within her rights to play away on Fitz, she has more class in her little finger than the both of them put together. Put that in your pipe Olitz and smoke it, basically.

So its not enough that daddy dearest has warned Liv to stay away from Fitz and the White House as far as possible but she has to try to save him in a last ditch effort but when Papa has made up his mind, nothing will sway it, not even his precious daughter. On her way out of the restaurant she sees Quinn, the idiot, spying on her so she what does Liv do? Try to save Quinn. That’s our Liv the eternal Mother Teresa, always out the save everyone but herself. In the end Quinn rudely gets rid of her. My issue with Quinn is that she feels entitled. Sure Olivia and co tried to destroy her life then Liv helped restore it, but she got herself in, she had the choice to walk away from it all but she didn’t. Hence I say suck it up and play your part and stop taking your unfounded shit out on everybody else. The audience particularly.

Another person who is beginning to bother me a little bit is Huck…what’s his deal in the season? Other than playing brooding computer nerd and being all creepy, he hasn’t really been up to much has he? He is not Quinn level of annoying but it would be good to put him to some use before he attains it. His present state is parallel to Quinn, he used to be B613 and now Quinn is, he is an assassin and Quinn is gagging to go on a killing spree, we have seen what she is like with just a sip of “whiskey”, so what is comes down to is who will serve the better purpose at the end of the day… dear God let it not be Quinn.

Harrison is a different kettle of fish all together. He is now in bed with Adnan Salif running her errands and planting dirty money into the Grant campaign so now we really want to know just how deep it goes between Adnan and Harrison and how badly he wants to keep Liv from finding out what will eventually be found out. And worse, what is Salif doing with Mama Pope?!!

Other bits and pieces

Jake playing fake boyfriend with Liv, its both sweet and funny and I want it to be real. He tells her to stock her fridge with more food because popcorn and wine does not a food group make.

Papa Pope is in with Leo… that cannot be good for Liv.