Dakota Johnson is on the cover of Elle US March Issue and she looks stunning. I love this shoot, the cover is a little unusual if anything, demurely coquettish, but everything else is fifty shades of cliché and then some. And this is just the beginning, there’ll be plenty more to come; she is only starring in the most anticipated movie in forever, playing one of the most coveted roles, at least for now. We still have a year to go before the film hits theatres- seriously I can’t believe its taking so long!- so the hype might have won off by then. Who knows. 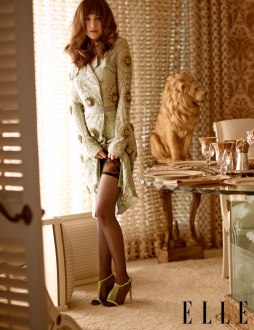 Excerpts from the interview-

On Reading Fifty Shades of Grey-

“Reading the book, I found myself more interested in the ways they were breaking each other down emotionally than the sex scenes. I think there’s a part of a woman that wants to be the thing that breaks a man down.”

“I don’t have any problem doing anything. The secret is I have no shame.”

Hmmm… I think its important to be informed about the nature of the character she plays and having read the books, shamelessly more than once (no judgements), I know Ana is not sexy, she is naive, intelligent, witty, shy and quite annoying sometimes actually.  She, her inner goddess and subconscious. I’m not sure about the “sexual honesty” angle needed for the role per se, except they are referring to Ana’s sexual eagerness to satisfy her sexual curiosity, but then again the movie will reportedly be a lot tamer than the books, which makes zero sense considering the reason the books became such a phenomenon was the sexual slant, although there’s so much more to the story. Maybe Elle just wanted to be the first to get Dakota role playing Ana…I see you Elle 😉

This shoot may not be based on the presumption that her character is sexual but it is not a far out conclusion to think it is. Still, its so tastefully done. And now, for the onslaught.

I cannot wait for the movie to come out. Gosh I’m such a cliché stan!