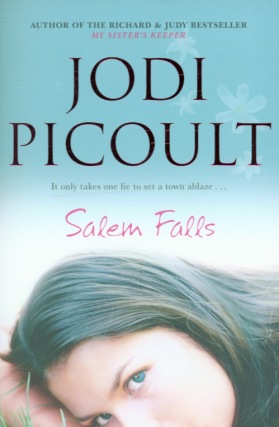 Jodi Picoult is a bit of an unusual writer whom I greatly admire. She has her formulae down to a science, a smooth way with words that even in the starkest of situations there is an underlying gentile. And this is Salem Falls, a most enchanting story about love, lies, secrets and witches.

Where better than a small town to get your life back together? That’s what wrongly accused, ex-teacher and now convicted sex offender Jack St Bride hopes to do when he finds himself in the New England village of Salem Falls. After 8 months of hell spent in prison, Jack hopes to put the nightmares of his past behind him. He takes up the job of dishwasher in Addie Peabody’s diner, a far cry from the life he lived. But here’s to new beginnings. Over time and in funny and emotional circumstances, Jack and Addie begin a relationship, really its beautiful to see it blossom. But Addie is living through nightmares of her own and having to deal with an eccentric father, it seems she cannot move forward. Jack wants to move forward and he wants to do so with Addie, but the town of Salem won’t let them.

A quartet of “witchy” teenage girls have set their sights on Jack, who rebuffs the advances of their leader, Gillian Duncan, daughter of the most influential man in the village. Daddy’s little girl in cahoots with her coven decide to make Jack the centre of a witch hunt. With a head of the Police department who does not wholly approve of Jack, a sex offender, living in Salem Falls, the odds are not in his favour. Soon enough, the past becomes the most important part of the present and once again, Jack has to defend himself.

Addie  is his saviour.

Salem Falls holds dark secrets of the past but in a small town nothing stays hidden for long. What happens in the dark must eventually come to light.

Flawlessly written and infectiously captured, Jodi Picoult stole my heart with this story. The writing is plenty times emotional but balanced with such wit and wisdom, she lays bare the emotions of her characters. The characterisation is absolute, there are many players in Salem Falls and Picoult gives us an insight to each of them because they are essential to the story of Jack and Addie. The writing is as fluid and sweeping as it gets. In an effort to give us a complete insight to Jack, Picoult works magic as she takes us back to his former life and walks us through to his birth and every facet in between without missing a beat or losing the reader. In the end we see Jack in his past and present, with an inclination of his future. A perfect symmetry. So majestically written, it defies imagination.

This is a love story with all the multiple layers and no clichés. Its impossible that a book be this captivating and intriguing and so beautifully written, but Salem Falls is all these things and so much more. And you’ll always go back to it. I did. And still do.